Facebook reporting has been a struggle for the past several months.

This is no surprise.

Almost every client we talk to has something to say about how the iOS14 update has messed with their Ad Reporting and they can’t optimize their campaigns properly.

A few months ago, we had one particular client come to us.

It’s less complicated than it sounds – we promise lol

This means they weren’t able to set proper KPIs and had troubles scaling profitably.

Plus, finding new angles and proper testing and optimizing tactics was a challenge – among other things.

It was similar to many other new client stories we’ve been hearing.

So we took them under our wing and started to work on scaling them.

Within 10 weeks, we were able to 2x their sales, 3x their sales revenue, and almost 2x their returning customer rate – all during iOS14 update.

To get started with the client, we needed to begin with calculating/estimating KPIs that we could use to scale.

As mentioned above, this was their number one issue due to reporting issues.

We made sure these KPIs weren’t losing the brand money and would help us in scaling the account profitably.

To do this, we analyzed trends in Shopify revenue to help us navigate through the iOS14 delay in attribution purchases that weren’t shown in the ads manager.

We were able to do this because we knew Facebook was their primary Top of Funnel traffic source.

Analyzing their TOF funnel KPIs while looking at cost per add to cart helped us a lot.

When we saw a campaign with promising early funnel stage metrics, we allowed these campaigns to run for longer, rather than turning them off for not reaching purchase KPIs.

From this, we saw the ATC convert and began to see optimization improvements for purchases.

We also prioritized campaign structure, so Facebook can optimize quickly and sustainably – this helps with keeping performance stable while scaling.

Once the reporting was sorted, we needed to find angles that worked.

This meant we needed to test a lot.

When testing an audience, we chose winning creatives we knew worked.

For testing creatives, we chose a winning audience we knew converted.

Once we found winners in these campaigns, we gradually increased the budget by 20% every few days provided the KPIs were met and scaled these campaigns as high as we could vertically.

For a faster scale, we duplicated the winning test campaigns and increased the budget on the new duplicate.

If this threw off optimization, then it wasn’t a big deal as we could simply turn off or scale down the new campaigns and have the old ones still running.

If the performance was sustained, this was a win. It was a quick way to double the budget for a single ad and allowed us to scale horizontally.

Now, we weren’t only scaling vertically, but we were scaling horizontally as well.

A double whammy if you ask us.

From here, we put the winning creatives and audiences into a scaling campaign.

All ad sets had the same 4-6 winning post IDs, and we started off with 3 creatives. As we found more winners, added them in on the ad level, gradually increasing the budget with each new ad.

This is a great example of using the vertical and horizontal scale in unison, with minimal risk of hurting optimization – the reason we were able to scale the budget so fast.

One important factor was that we allowed extra room in the reported KPIs.

If we had stuck to the original 2.5X ROAS KPI before scaling, we would never have achieved these results.

By dropping the KPIs and accounting for people buying later on (after clicking an ad, referrals, etc.), or not being tracked by iOS14 – we ended up seeing an overall increase week over week in Shopify despite a decrease in Facebook KPIs decreasing.

We were positive the increase was due to our efforts because as mentioned above, Facebook is the client’s only considerable traffic source and the only variable that changed in the last 10 weeks.

To scale, even more, once we found winning creatives we doubled down on these angles building variations testing subtle details like thumbnails, opening frames, etc. to scratch every last cent out of these creatives. 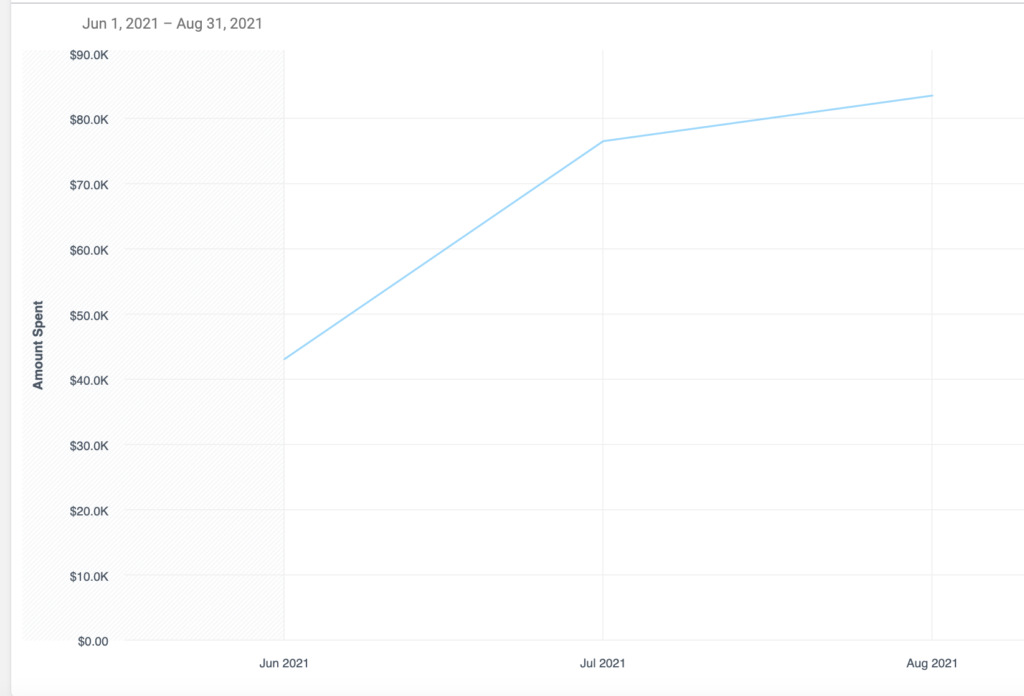 All of this success can be attributed to the extra room in the KPIs and testing new angles we found resonated with their customers.

At the end of the day, yeah iOS14 sucks and has impacted a lot of brand’s ability to scale.

But, if you’re working with the right team who understands the difficulties of the current Facebook Ads marketplace, then you can still see some wicked success.

Don’t let the fear of change stop you from scaling.

Our team has developed ways to go beyond Facebook’s reporting and determine where the successful campaigns lie.

If you’re looking to scale during this unpredictable time, book a call with our team below.

Zero to Double: Why We Always Succeed in Increasing Our Client Sales